Dengue fever is found in the tropics and Africa, is caused by four closely related viruses. It is also known as break bone fever because of the severe pain in joints and muscles. The geographical spread is similar to malaria, but unlike malaria, dengue is often found in urban areas of tropical nations, including Puerto Rico, Singapore, Malaysia, Taiwan, Thailand, Indonesia, Pakistan, India, Brazil, Vietnam, Guyana, Venezuela and Bangladesh. 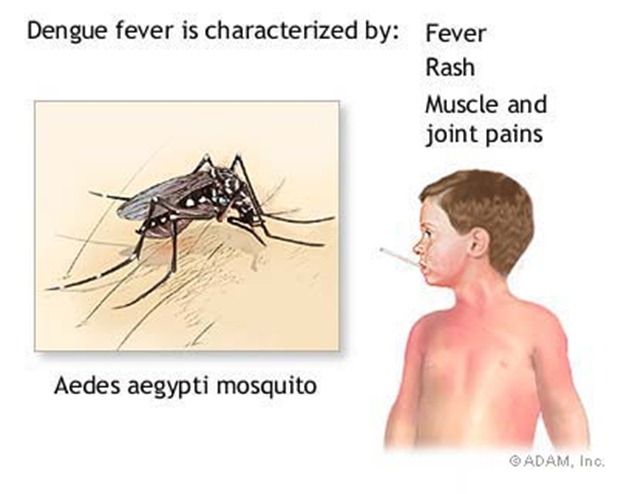 Dengue is transmitted to humans by the Aedas Aegypti mosquito, which feeds during the day. This mosquito is black and has white spots on its legs and body. It breeds in fresh water and can survive cooler temperatures. Patients with dengue can pass on the infection only through mosquitoes or blood products and while they still have the fever.

Most common symptoms are sudden onset of severe headache, pain in muscles and joints, pain behind the eyes, fever and rash. The dengue rash is characteristically bright red and usually appears first on the lower limbs and the chest in some patients, it spreads to cover most of the body. Some patients may also suffer from abdominal pain, nausea, vomiting or diarrhea. Older children and adults are usually sicker than young children.

Dengue is diagnosed by a blood test.Some cases develop much milder symptoms which can be misdiagnosed as flu or other viral infection when no rash is present. Thus travelers from tropical areas may pass on dengue in their home countries unknowingly, having not been properly diagnosed at the height of their illness. The classic dengue fever lasts about six to seven days, with a smaller peak of fever at the trailing end of the disease. Clinically, the platelet count will drop until the patient’s temperature is normal. In severe cases patients can have very high fever, internal hemorrhaging and may even go into shock which has a high mortality rate.

Te main treatment for dengue patients is rest and increased fluid intake. In rare cases, if the patient worsens the main treatment is timely supportive therapy to tackle shock due to haemoconcentration and bleeding.Close monitoring of vital signs in critical period is vital. The patient should be given as many fluids as he can take to prevent dehydration. In case of vomiting, fluids should be given through an intravenous drip.