Today everyone is conscious about their healthy lifestyle. Everyone wants to look great and wants to lead a flawless healthy life. There are many ways through which people are maintaining themselves, out of which Mediterranean diet is the popular one.

The Mediterranean diet is a modern nutritional model inspired by the traditional dietary patterns of some of the countries of the Mediterranean basin, particularly Greece and Italy. The diet is from the Greek island of Crete where Cretans and other Greeks live longer than any other populations in the world and they are 20% less likely to die of coronary artery disease than Americans. They also have 1/3 less cancer than in U.S.

Common to the diets of these regions are a high consumption of fruit and vegetables, bread, wheat and other cereals, olive oil and fish, making them low in saturated fat and high in monosaturated fat and dietary fiber.

One of the main best features of this diet is the large amount of olive oil used in it. Unlike the high amount of animal fats typical to the American diet, olive oil lowers cholesterol levels in blood. It is also known to lower blood sugar levels and blood pressure. In addition, the consumption of red wine is considered a possible factor, as it contains flavonoids with powerful antioxidant properties.

Some questions have been raised as to if the diet provides adequate amounts of all nutrients, particularly calcium and iron. Nonetheless, green vegetables, a good source of calcium and iron, are used in the Mediterranean diet as well as goat cheese, a good source of calcium. Eating red meat sparingly seems to also increase health. There is a general consensus among health professionals that the Mediterranean Diet is healthier than the Asian and American diet because more grains, such as spaghetti, fruits, vegetables, legumes, nuts and olive oil are consumed. 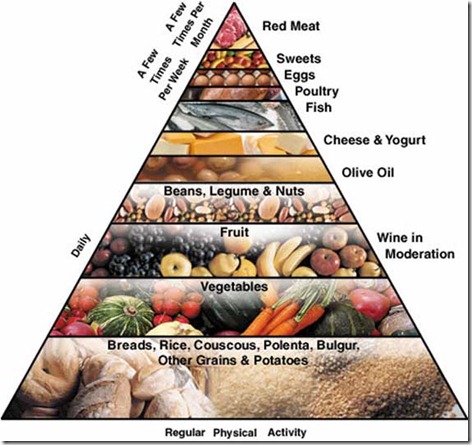 Others oils rich monounsaturated fats, such as canola or peanut oil, can be substituted by olive oil.People who are watching their weight should limit their oil consumption. Pyramid recommend eating lots of fruits, vegetables and whole grains but the Greeks ate very little red meat and they consumed far more plant foods, averaging nine servings a day of antioxidant rich vegetables.

Mediterranean diet is without doubt the only option you should consider in any effort to lose weight. Many popular diets like those of high protein variety are extremely harmful and although they sometimes succeed in delivering their promises of shedding weight, the chances of keeping this weight off are very unlikely.

Next post: Murgh Musallam With Rice Recipe By Chef Gulzar